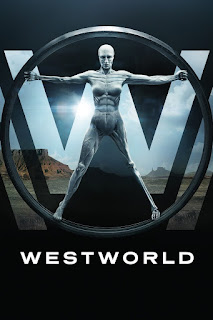 So, a cult seventies science fiction fable about the perils of entrusting our entertainment to robots has been turned into a new cable TV series by the brother of Christopher ‘Inception’ Nolan and JJ ‘Lost’ Abrams.  Great Anglo-American cast (and a new Hemsworth brother to boot!), great production and directing credits, and a first episode that lived up to the promise of the hype.

Many are seeing Westworld as the next big thing after Game of Thrones, the HBO series that has outsold every other TV series and garnered a record-breaking number of awards. But thematically and tonally it is much closer to Battlestar Galactica, the equally lauded series of eleven years back. Both BSG and Westworld rests on the oldest science fiction staple of all – the creation of artificial life and our responsibility to our creations.
Brain Aldiss has argued that Mary Shelley’s ‘Frankenstein: A Modern Prometheus’ was the first true science fiction novel, and I am loathe to disagree. Its central theme of the derogation of responsibility by the creator for his creature is often overlooked by filmmakers (Kenneth Brannagh’s version being a notable exception). Most just dwell on the monster being monstrous but in Shelley’s original he is intelligent, eloquent and tortured by the rejection he faced from Frankenstein and wider society. He became monstrous because he was treated as a monster.

This theme has been revisited so many times in science fiction, from the awful, killer robot stories of pulp fiction, to the more sophisticated treatment of Asimov’s Robot novels, through to Blade Runner, the Matrix films and BSG, and most recently the rather wonderful Channel 4 series ‘Humans’.

At its core, Westworld is about the creation of sentient beings for the sport of humans. These beings, known as ‘Hosts’ are androids with limited self-determination, their memories wiped at the end of each cycle, and each has a script to which they adhere, allowing them a limited repertoire of actions. In some this way mimics human existence, where our memories are selective, and that we all work within the limitations of ‘scripts’ determined by culture, upbringing and social expectation. It is also perhaps an echoing of Calvinist theology of predestination – free will is an illusion, we all ultimately serve God’s purposes.

But the abuse meted out to the ‘Hosts’ in the name of entertaining the worst fantasies of humans (especially men) who see a Western setting as a great excuse to show off such ‘manly’ virtues such as murder and rape.  The invitation to come to Westworld touts the fact that actions there have no consequences. Except, obviously, they do, because the Hosts are developing glitches, memories of past roles and past abuses are beginning to surface, causing failures. In one case Abernathy, one such ‘glitching’ Host delivers a Shakespearian, almost Biblically prophetic rant as he confronts his maker (in the form of Anthony Hopkins’s Frost). Quoting Romeo and Juliet, he enigmatically tells his creator “these violent delights have violent ends”, before being switched off. These are the final words he gives his ‘daughter’, Delores, at the end of the first episode. It is a warning of what is to come.

The creation of artificial life and artificial intelligence is becoming close to technological reality, and it is stories like Westworld that remind us of the dangers of taking on the role of Creator when we lack the moral core to live up to that role.

However, in reality, we do not need to create artificial beings to abuse. The abuse of those deemed lesser beings or sub-humans is a common symptom of decadent or primitive societies. Whether it is slavery and human trafficking, blood sports, proxy wars, racism and class or caste systems, we are prone to work out our worst human instincts through abuse of the ‘other’ who we can make subhuman to maintain our illusion of being good and moral.

CS Lewis in his seminal work The Abolition of Man pointed out that “the power of Man to make himself what he pleases means... the power of some men to make other men what THEY please.” As we become more technologically advanced, this power to shape other parts of humanity to our will grows rather than lessens.


The story of the birth, life and death of Jesus reminds us, as the German theologian Dietrich Bonhoeffer put it that “Through Christ’s incarnation, all of humanity regains the dignity of bearing the image of God. Whoever from now on attacks the least of people attacks Christ, who took on human form and who in himself has restored the image of God for all who bear a human countenance.” In short, we have a moral duty to all our fellow humanity to see and treat them on an equal footing - even if we must forgo our comforts and luxuries bought at the expense of others.

Westworld is about our moral responsibility to our fellow man, about the myth that our actions have no impact or consequence for us regardless of their consequences for others, and that playing God is presuming a role for humanity for which we are singularly ill-equipped. It has a resonance in social justice and bioethics. I look forward to seeing how it explores these themes in the coming weeks.
at October 08, 2016