Knowing your scriptures better than the devil: lessons from the Handmaid’s Tale 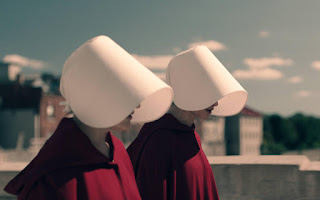 Margaret Atwood seminal narrative of a nameless woman’s struggle to survive in a repressive theocratic dictatorship has gone beyond being a widely lauded literary classic. With its latest incarnation as a television series (it has previously been an opera and a Hollywood film), it has moved into that iconic territory that is inhabited by Nineteen Eighty-Four, We and Brave New World.  It has become a prophetic warning of the danger of totalitarianism.

Unlike those three, male penned titles, Handmaid is focussed on the particular evils of religious dictatorships and the oppression of the female body as a tool of the state. As such, the red dresses and white bonnets of the Handmaids, in particular, have become items of political protest and even fashion statements. They have certainly become almost instantly recognisable, even before the cinematic and televisual adaptations, and have themselves become iconic – symbols of the oppression of women who have been reduced to the status of a womb on legs.

The gender politics of The Handmaid’s Tale is also being seen as very topical, with the arrival of another Republican, abortion de-funding regime in White House. Here in the UK, the current cosying up of the Tory minority government to the Democratic Unionist Party is raising similar liberal hysteria about a threat to abortion rights and same-sex marriage in Britain. While the latter is frankly silly (not only are both issues matters for devolved governments and therefore strictly off the table in any Westminster level negotiations but all the main parties in Ulster at the moment are pro-Life and anti-same-sex marriage - the DUP is not outside of the norm in Northern Ireland in this respect).
Nevertheless, the former has some traction.

The TV series has certainly hit a raw nerve in the States, with its depiction of the rise of the Sons of Jacob (the religious fanatics who take over at least part of the USA to form their Republic of Gilead). We see what Atwood only alludes to – the closing of women’s bank accounts, loss of their rights to employment and rights to property. We hear about a murderous attack on US Congress, blamed on terrorists but actually organised by the Sons of Jacob as a pretext for the imposition of martial law and the suspension of the constitution. One presumes this is after many years of building up a network of supporters and wider cultural acceptance of their particular flavour of ultra-conservative, Reformed Christianity.

It is chillingly not far from reality – similar scenarios have allowed other religious and nationalist fanatics take power in many parts of the world over the centuries. Likewise, the TV show gives us summary executions of homosexuals, abortion providers, ministers and priests of other faiths and denominations, etc. such as may be seen in modern-day Iran and Chechnya. ‘Salvaging’ – the group execution of certain political prisoners is taken from an Iranian model that makes the mob complicit in the death. The segregation of the women into different castes based around dress can be found in Nazi concentration camps and many other regimes. And other forms of violence against women, including female genital mutilation (one character is given a clitorectomy to stop her from seeking forbidden sexual liaisons), also have a strong basis in reality.

But for me, the most challenging element deep down in the structure of this shocking novel is the religious roots of this brutal regime. The Sons of Jacob adhere to biblical literalism. However, as anyone who knows the Bible well can tell you, there are many ways to take the Bible literally, many mutually contradictory, and all reliant on a selective use of proof texts.

When Aunt Lydia, who is the main teacher and moral overseer of the Handmaids, quotes Matthew 5:5 ‘blessed are the meek’ to Offred, our protagonist, to encourage her to comply with her interrogation, Offred quotes back at Matthew 5:10 ‘blessed are those who suffer for the cause of righteousness, for theirs is the Kingdom of Heaven’, and gets beaten and cattle prodded for her audacity.  Satan knows the scriptures well, so be sure you know them better.

That, at the end of the day, is how the US sleepwalks into Gilead. As Offred says, we were asleep even when they slaughtered Congress, suspended the Constitution and imposed martial law. The secular majority could not believe it could happen and did not engage with the scriptures that the Sons of Jacob used in what they believed was their struggle to restore the US to a pristine, New England Puritan righteousness. The religious did not know their scripture well enough to challenge the Sons of Jacob, and so many of them fell under their spell.

Christians need to come terms with our history. We did set up brutal theocracies – whether it was the Salem witch trials in Puritan New England, the Spanish Inquisition, Calvin’s Geneva, etc. The church has form. We also did these things because we took our scriptures and used them selectively to justify what we already wanted to do. The Bible is a living book. It teaches us and shows us the way when we interrogate it, but we need wisdom about the questions and to interrogate the whole of scripture, not just the bits we know or feel comfortable with.

As a final note, while The Handmaid’s Tale can seem like an anti-Christian polemic, that would be to do it a disservice. Atwood is far too nuanced a writer for simplistic polemics. The Republic of Gilead is at war with Baptists, Catholics and Quakers, who smuggle fertile women and other political refugees across the border into Canada. Some Christians (at least those from non-pacifist denominations) are spearheading the armed resistance inside and outside of Gilead. Just as not all Muslims (and not even all Shia) subscribe to the Iranian strain that has ruled for decades, let alone do all Sunni subscribe to the ultra-extreme Wahhabism of the Islamic State, so not all Christians subscribe to the doctrines and practices of the Sons of Jacob. Some of them knew their scriptures and their humanity much better.
at June 16, 2017 No comments: