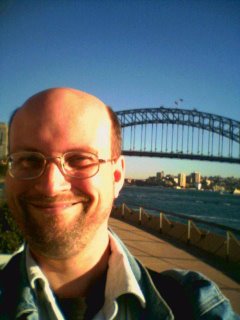 Having never been south of the equator before, this was a big adventure in some ways. However, it was meant to be work, and I did work pretty hard, but I also got two whole days to just explore Sydney before my work started.

The first thing that struck me was how English it felt - driving on the left, familiar road names and place names (there's a Hyde Park, Oxford Street, Croydon, Paddington, Lewisham - the list goes on). Then it began to feel less like London and more like Vancouver with its huge Chinese, Japanese and Korean communities (I was staying and working near China town though, which did slightly skew things). Overall, the familiar aspects soon blended with something indefinably Australian. Sydney is very much it's own city, not a copy of a European or North American city - but there are echoes of both influences. Except for the Opera House, which is beautiful and unique. I wished I could have afforded to go to a performance!

The main aim of being there was simply to network with other groups of Christian medical organisations involved in international health work. In particular I spent four days in the Blue Mountains (which, while being neither blue nor mountainous, are beautiful) at a conference centre called Meroo with a group of medics and clerics from all over the world as we looked a church led responses to HIV and AIDS around the world, and out which we have set up a new network (www.icmdahivintiative.org)

The hardest thing with these long haul trips is being away from family. Thankfully there were cybercafes aplenty across downtown Sydney, and when back in town for the main bulk of the conference we could MSN one another. However exciting and absorbing it is to work in such an environment, it is always good to get back home afterwards!
at July 22, 2006 No comments: