Addressing the spiritual in day-to-day care of people, whether as a nurse or other health professionally, is becoming nationally and globally something of cause de jour. Conference, books, academic papers abound, but I think one of the things that is rapidly becoming apparent is that there is no uniformity of agreement on what spirituality and spiritual care actually are.

Wilf McSherry of the University of Hull at the conference I recently attended in Malta (‘Spirituality: The Human Dimension In Care’) pointed out that while nurses and other health professionals increasingly understand that spiritual care is about helping a patient on their journey through illness - addressing the needs for meaning in the experience, finding resources to cope with change and suffering and finding some sense of the transcendent in the whole experience - most patients and their relatives think by spiritual we mean "religious" and so say it is not for them - despite then talking about these wider spiritual issues as being relevant (but not using "spiritual" language to do so). Spiritual care does not necessarily mean religious care (although that is a part of it).

It is interesting that most of the research being done in this field in Europe at least (and the USA and Canada) seems to be undertaken by Christians. There is some New Age stuff out there as well, but not much else. Now, as a Christian myself I am heartened by the work my fellow believers have put in to the topic - and in a non-partisan manner - they are addressing the concept of "spiritual care" in its widest sense (more so, I venture than some of the more wacky New Age approaches, which seem hopelessly vague and wishy-washy to me). No, I am more concerned that the humanist scholars are not out there as well, nor are there humanist chaplains. Surely we are a secular culture here in the West, and that culture should have found itself a secular spiritual expression. However, it seems that in a secular culture, the spiritual is still a taboo area, and still seen as the provenance of the religious. Maybe that should not surprise us.

And maybe that is a reflection of our culture's spiritual poverty. I noticed that the Maltese remain deeply religious (Roman Catholic), and committed to spiritual care - the Cappuchin monks provide over twenty Chaplains to the health services of Malta and Gozo. My father-in-law manages with three part time chaplains and a small number of volunteers for a major urban hospital serving a population of a quarter of million plus. In Malta, with around 400,000 people the one major hospital has sixteen full time chaplains. They have also built in their brand new hospital a chapel physically (and very symbolically) at the centre of the hospital. 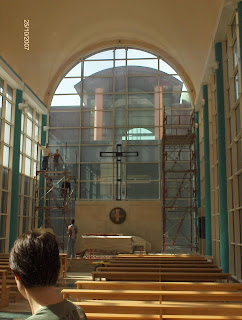 In a culture so steeped in the spiritual this makes sense - the Christian faith creates the framework for addressing the core spiritual needs of the individual. I wonder what that framework now is here in the UK? The answer seems to be so atomised and individualised that it must be a nightmare to approach spiritual care outside of shared framework of one faith or another.

But I digress. The conference, while somewhat didactic to my tastes (my bum got very numb from sitting for so long), still was very engaging. Perhaps the main thing I took away from it was that you cannot teach nurses to be good at caring for the spiritual needs of their patients. They need to "get it" - they need to "catch it", but they cannot really be taught it. Yes, you can teach basic skills and awareness, but to understands the spiritual needs of a patient takes a certain imagination and empathy, and certain willingness to step outside of modern imposed professional boundaries to recognise the patient as a person (as I learnt earlier today, in Uganda they now use the term "friend" instead). At its core, it takes an awareness of the spritual side of one's own nature to be able to grasp the spiritual needs of one's own client - and in a secular culture, there is little language and shared framework for most people to be really be able to do this.

Of course, this is nothing new - caring for the spiritual is what nurses have always done. The roots of nursing, in Europe at least, are in the Christian monastic orders where spiritual care came as second nature - it was part of the warp and weft of their very existence. Other faiths have similar traditions of care, even humanism is rooted in such notions.

Sadly, here in the UK at least, this ethos seems to have been lost in our professional and wider culture in the 21st century.
at November 01, 2007 No comments: