The body and Altered Carbon 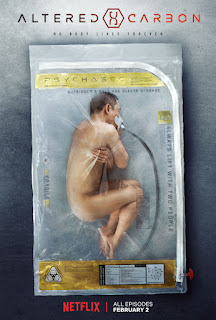 Altered Carbon is the huge big budget science fiction offering from Netflix. While their recent output in films has been decidedly dodgy (Bright and The Cloverfield Paradox to name but two that audiences and critics alike have panned), Altered Carbon has had a more mixed response.

Its central premise is that, out of salvaged ancient alien technology, humans have discovered a way to download and record human consciousness in small, hard drive-like devices called stacks that sit at the top of the spinal column. At death, this stack can be reinserted into a new body. If you are poor and die young or as a result of crime, the state will spin you up into any available body (usually those of criminals whose stacks have been removed and put on ice indefinitely). Thus, in an early scene, we see the parents of a seven-year-old girl who died in an accident brought back in the body of a middle-aged woman. Race and gender become irrelevant – an Asian man comes back in a Caucasian body; an Afro-American woman comes back in a white male body.
In one amusing scene, a cop of Mexcian descent spins up her late Grandmother into the body of a massive, tattooed and bearded drug dealer. Watching this massive man trapesing around a market choosing the choicest ingredients for the family feast on Día de los Muertos was initially amusing, then strangely poignant and uncomfortable, as this ancient festival of remembrance became subverted by new technology,

Of course, the rich can afford to have multiple cloned bodies in storage to give them back their own bodies after death. They can also regularly back-up their stacks, ensuring that even if the stack is destroyed, they can still be brought back. When a rich man is murdered and his stack destroyed just before his regular backup, it means his last 48 hours were lost and the identity of his murderer remains a mystery. This becomes the centre of the story.

Now, there is a lot to say about this series, including its huge debt to Blade Runner in visual style, and indeed to numerous other films. Actually, even the central conceit is far from original, although seldom seen in cinema and TV. Greg Bear introduced the idea of implants that could house a human consciousness and be re-housed in a new body in Eon back in 1985. Other authors, including Ian M Banks, Ken McLeod and Peter F Hamilton have repeatedly used the idea in their science fiction.

It is indeed a fascinating idea – not least because of its underlying assumptions. At its core is the idea that the human self is just software, the body merely the replaceable hardware on which it runs. Self is memory, personality traits merely programmes. The real you is just data, and data can be copied, uploaded, downloaded and stored.

Eastern religions also resonate with this idea with the doctrine of reincarnation – the spirit reborn time and time again into a new body. And for many, the Christian idea of life after death is seen as a disembodied existence in God’s presence. That, however, is a travesty of the actual biblical teaching.

Science Fiction loves this idea because it means in the godless universe that most of the genre’s authors inhabit, we have the promise of life after death. Posthumansists sees this as technologically achievable within the next century at the most.

It is a secular dream, but it is a fantasy.

The actual biblical understanding is quite at odds with all of this. The body and the spirit are integral. The word for soul in Hebrew and Greek means simply the person, the self, and in Hebrew is used of the body as well as the mind. The physical and spiritual are closely linked, so much so that life after death is always seen as an embodied existence – there is no positive depiction of a disembodied afterlife in either Old or New Testaments.

We are fully embodied in our self. Our memories are not just seated in our brains – they are also seated in our muscles and viscera. Our hearts and guts contain brain cells, and messages from the heart and bowels affect the brain as much as vice versa. Take us away from our bodies, we lose our self, our soul. We are not data, not software that can run in any body. We are an integrated whole. We are also constantly changing, our minds and our bodies are not the same from one moment to the next, and their changes are not separate, but intimately interlinked. Self is not static, it is in constant flux.

Altered Carbon is an interesting and fun bit of slightly OTT cyberpunk with some interesting ideas that it never fully explores, not least of which is how alienated a person put into a new body that is not their own would be. Indeed, would they even be the same person?