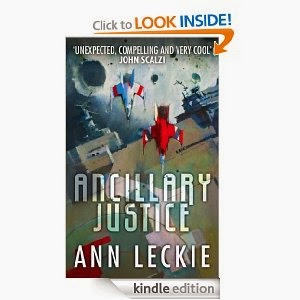 Every now and again I get interested in a book just because of a random review I stumble upon. But now I have a Kindle, it is also easy to just download a few sample chapters to see if it really is worth reading.

What I found here was the debut novel of Anne Leckie, Ancillary Justice which was getting a lot of buzz last autumn when it first came out.  The story opens with its (probably female) protagonist, Breq, on a wintery and brutal world acting with impulsive kindness to a former officer that she had served with in the armed forces of the aggressively expansionist Radchaai empire. It soon becomes apparent that Breq has hair trigger killer instincts, some interesting enhancements, and a lot of anger.  Thus far she is similar to the tough female killers that have populated science fiction novels from William Gibson to Iain M Banks for decades.

But Breq is rather unique - she is not what she once was. Literally. She was Justice of Toren, a massive troop carrying starship, most of whose soldiers were ancillaries, mind wiped prisoners of war, now slaved to the ship's Artificial Intelligence.  As a result, Justice of Toren sees the world through multiple eyes in multiple locations, and can speak (and indeed, sing) with literally thousands of voices. Only all that is now left of her is one, lone ancillary, Justice of Toren One Esk Nineteen, out to avenge the death of all she once was and all she had once cared for. She is an AI in a human body trying fit into human society, with a quest for vengeance.

The multiple conversations and observations that her multiple self shared with her human officers and the citizens of a world recently 'annexed' by the Radchaai makes for fascinating reading, and when this is broken down in one particularly traumatic event about of a third of the way into the novel, we get a real sense of the loss, disorientation and fear that ensues for her/it.

All of this is interesting science fiction, set in a standard space operatic format and happily playing with all the usual tropes of the genre (vast empires, massive spaceships run by AIs, special weapons, exotic worlds, epic battles). But actually the novel is a lot more than this precis suggests. Exploring the nature of empire, imperial expansionism and the war crimes that are committed in the name of protecting that empire, it does what the best science fiction does and holds a mirror up to our own world. Lecke is American, but as a Brit I got at once the sense of an empire reaching the end of its expansion and the yearning for the glory days of old amongst the officer class (and their obsession with drinking tea!). One telling quote summarises the realisation that some of the Radchaai were coming to about the nature of their empire:


luxury always comes at someone else’s expense. One of the many advantages of civilization is that one doesn't generally have to see that, if one doesn't wish.

Some amongst the Radchaai (a word that means 'civilised') are questioning the empire, and this hinges around two, appalling war crimes to which the Justice of Toren is both witness and contributor.  The tension between the conservative and progressive streams amongst the Radchaai are at the centre of the story.

Another interesting quirk of the narrative, and one that most reviewers (especially male reviewers) hone in on first is the use of gender. Radchaai culture and language make no apparent distinction between genders, using a single pronoun for either sex and no apparent differences in dress or social roles between male and female.  As a result, the non-human Breq struggles conceptually with languages and cultures that do make such distinctions. All characters are referred to in the feminine, except rarely where she must speak in other languages and to other cultures that do not make such distinctions, where we learn she regularly gets genders the wrong way round, causing much confusion and occasionally, offence! What this achieves is initially a sharp sense of confusion and dislocation in the reader, although by the end of the novel I had ceased to notice and was going with the flow.  It does ask the reader where her/his presuppositions about how we assume behaviour and social role will fall along gender lines, and how culturally prescribed these presuppositions are.

All this is done in a narrative that avoids too many space opera cliches that pander to the inner thirteen year old male of so many of the genre's fans. There is little violence (and when it does happen it is mostly 'off screen' and all the more disturbing for it), no sex or sexual tension (although Breq's underlying lack of humanity means she misses the cues that may be there).  Like Iain M Banks and Ken McLeod, Leckie is subverting the genre to look at political themes that this most politically conservative and masculine of all science fiction sub-genres generally eschews.

The book does end on an apparent anti-climax, but as it is the first book of a trilogy this is forgivable, leaving you at least wanting to know where it goes next. A strong start to a trilogy and an impressive debut novel. I look forward to the second volume out later this year.