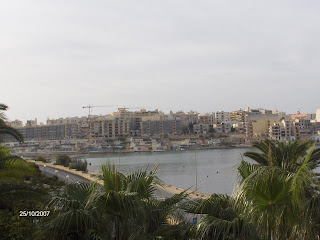 So, have been in Malta for an international conference on spirituality, spiritual care and nursing hosted and organized by the University of Malta school of care sciences. More on the conference later - firstly my time here so far in quick summary: arrived at Valletta airport on schedule (around 12.30 local time), and was met by a taxi driver who ferried me across the island to the hotel in Salima bay. Have a nice photo of the view. I basically spent the afternoon getting myself unpacked, showered, organised and catching up on lost sleep (I never sleep well on airplanes).

The evening was spent catching up with a colleague from Norway and her students from and another colleague from the Netherlands and his students. My Norwegian colleague and I worked on the Nurses Christian Fellowship International European regional conference in August last year, and my Dutch colleague is based at the university in Ede that hosted the conference. We are already hatching plans for a conference on the spiritual care theme in 2009 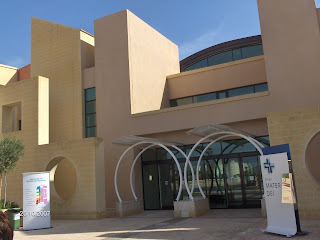 Yesterday I was on a guided tour of the old St. Luke's hospital and the newly built Matre Dies hospital (left) - so new that they do not start moving the patients and staff over until next week - so we had the rare privilege of seeing a pristine, unused hospital. Impressively in a 850 bed hospital they have a team of six full time chaplains (all Capuchin Friars), plus another fifteen working at the various clinics, community centres and specialist hospitals. This is the only main hospital in the country - but when the population is only about one and a half times that of Medway, and the Island itself is about half an hours drive from one end to the other, that is not as odd as it seems.

Malta is very built up, very North African sort of flat roofed adobe houses, and the local language is a mixture of Arabic and Italian and English. They also speak English fluently, and all the road signs are in English. Very friendly people.

Anyway, yesterday evening the conference started, and I realised I would need my tie as even the students were dressed in Sunday best! My talk seemed to go OK, not as high powered as the others, but it was not meant to be. However, those of us who had been on the tour earlier in the day all ducked out of the reception in the evening because we had not eaten since breakfast and nothing more substantial than canapés was on offer.

Today has been a series of papers, and then a rather huge lunch in a frankly overcrowded restaurant. We were supposed to be back strictly at 2.30, but they were still serving some people their main courses when I left to catch 40 winks. The conference has about 450 attendees, and all but twenty of us a re Maltese, mostly students.

In the evening some of us went on a "historical tour" of Berega, and the original hospital of the Knight of St John (now a Carmelite convent, and we were very privileged to be allowed in to see around the building by the sisters). After a visit to the church of St. Lawrence (the first Maltese Christian martyr –roasted alive on a barbecue by the Romans – nice people eh?) we rounded of the evening with a light meal – a sort of Maltese metze / tappas – very strong cheeses, dried vegetables, sausages, etc, etc. We were all shattered by the time we got back to the hotel gone midnight.

Today, after filing this blog I am off to do a quick souvenir hunt and then to the airport. Looking forward to being home again.