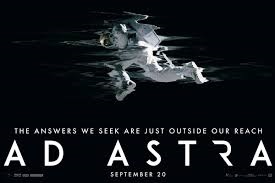 Tying itself firmly to the coattails of recent, 'hard' science fiction films such as Gravity, Interstellar, and Moon, Ad Astra is very much an attempt to do a Heart of Darkness for the space age in much the same way that Apocalypse Now did for the Vietnam War.

Visually sumptuous, well-acted, with an evocative Max Richter score, and in writer/director James Gray a creator who has an interesting body of work behind him. On paper at least, it certainly has all the right credentials

Hopes were high for this film before its release, and some critics have praised it highly. Astronaut Roy McBride (Brad Pitt) is sent on a mission across the solar system to contact and stop his long-lost father (Tommy Lee Jones) from an enterprise that could threaten all life on earth. We are also promised that what he discovers along the way could have profound implications for humanity and our understanding of our place in the universe.

We explore McBride's inner turmoil over his long-absent father through a series of inner monologues, while externally he shows little or no emotion or human connection. It's because he's never really known his father, you see. His father, we are repeatedly told by other characters, is a hero of space exploration, someone who went further into space than anyone else in order to uncover the truth of whether there is any other intelligent life out there. McBride only knows him as an absent figure for most of his childhood and his whole adult life.

A series of action-packed set pieces break up these introspective musings. They make little sense in themselves; an attempted hi-jacking on lunar buggies; an abandoned space station with rage-filled, killer test-subjects; a lethal zero-g fistfight. Each gives McBride an excuse to muse on the fragility of human existence, the pointlessness of our endless wars and conflicts and the bitterness of the unintended consequences to well-intentioned but misguided choices.

But its baggy, clumsy plotting could have been forgivable if there was a denouement that actually brought everything together or, at the very least, left us with a sense of awe and mystery. As best I can I will avoid too many spoilers, but it is hard to critique the film without hinting at the finale - so skip to the last three paragraphs if you would rather not know anything about how the film finishes.

Firstly, it is a pretty saccharine and bland ending. When father and son finally confront one another at the very edge of our planetary system, there are two major revelations - about his father and about what his father has found. They should fall like hammer blows, but they don't. The first is meant to change how McBride sees himself, the second how humanity understands its place in the universe. But they are skipped over so quickly that there is little impact at all.

Secondly, because we never see much of McBride's childhood or his marriage, we are only given vague visual cues and ponderous voice-overs to tell us he finds it hard to form emotional attachments or care for others. Consequently, we end up not really caring about him. More showing, less telling would have fleshed McBride out more and given us some emotional investment in him. Giving the criminally under-used Liv Tyler, as his long-suffering other-half, some actual dialogue and character development would also have given McBride's character arc far more emotional heft and depth.

Thirdly, Arthur C Clarke said that there were two answers to the question of whether we are alone in the universe. Either there is intelligent life out there, or there is none. Both answers are profoundly terrifying and have huge existential ramifications for the human race. While the question remains open, like Schrodinger's cat in its unopened box, we live with both options and can explore the ideas that they may unleash. The film opens the box, finds the cat dead and then shrugs its shoulders. McBride resolves his daddy issues with a similar shrug, resolves to be more connected with people in future (in another voice-over) and goes back to a presumably happier life with his long-suffering wife. And that's it! So much for uncovering the profound mysteries of the universe!

One of the other incidental issues touched upon in the film is religion. The crew with whom McBride travels to Mars, pray to St Christopher as they launch, commit the body of a departed comrade to God's keeping with a Christian prayer and, in an old recorded message, McBride's father talks of the profound sense of God's presence with him as he heads further out into the void. The denouement kind of skips over this, but the implication is that his discoveries have stripped McBride's father of hope and faith. This was another wasted opportunity that the film could have explored.

In a vast, beautiful but apparently lifeless universe, who are we, and what is our world? It is a question we are increasingly having to confront as we discover more and more about the scale and nature of our cosmos.

As a Christian, I do not see the universe as devoid of meaning. On the contrary, it is filled with divine meaning, whether or not there is any other intelligent life out there. Why the universe is so unimaginably vast is a mystery. Why God has created all of this to lavish his love on one species on one, tiny world in all this vastness is a source of wonder. The alternative, that we are utterly alone in the vastness of a meaningless void is truly soul shrivelling.

My faith in Christ, who left the divine realm to take up frail humanity and to walk a path of self-sacrifice to the cross for our sake, is nonsense to many, but for those of us who believe, it takes that vast, existential ache as we look out into the expanse of the cosmos and says 'I am known, I am loved and my existence has meaning'.

Our hope is not, as the film's opening and title suggest, in the stars. It is in the one who made them.

Email ThisBlogThis!Share to TwitterShare to FacebookShare to Pinterest
Labels: Fims

Tying itself firmly to the coattails of recent, 'hard' science fiction films such as Gravity, Interstellar, and Moon , Ad Astra  ...